The Costa Dorada is located in the Autonomous Community of Catalonia, and covers all the beaches along the Tarragona coastline. This region of the province of Tarragona is well-known for its splendid fine-grained, golden-coloured beaches as well as for its unbeatable climate.

While the climatic conditions vary along the coast and nearby areas to the mountains, the temperature is generally quite temperate regardless of the season.

However, the Costa Daurada is not only worth a visit during the hottest months (July and August) but also during the autumn and spring, thanks to the fact that apart form its beaches, this town is famous for hosting sites of great historical, cultural, ecological and scenic value, such as the Prades Mountains and the Ebro Delta Natural Park.

Tarragona is a city that is well worth a visit to discover its essence. Declared a World Heritage Site, its stones contain its history, coming to life to show you the past of this great city.

There’s nothing like spending the day in Tarragona, on the shores of the Mediterranean, taking you back to the last Roman empire that its inhabitants today live alongside. Thanks to the historical reconstruction that has taken place, along with the work of archaeologists, historians and storytellers, the great history of this city has been shared and divulged, and all you have to do is visit it to find what it is all about.

Dine under the vaults of the Roman circus, get lost in the alleys of the old town, where the essence of the medieval city has remained intact or make vermouth immersed in more than 2,000 years of history. This is the true world heritage site of Tarragona!

There are 10 essential visits that are not to be missed if you visit Tarragona. The first one is the Cathedral, which dates back to the twelfth century, built in the highest part of the city, close to the Roman temple of worship of the emperor. If you want to really go back in time, we recommend that you go to see the model of the Roman Tarraco, which is a miniature 1:500 scaled reconstruction of the city during the 2nd century The Roman amphitheatre is another of the jewels of the city, a building that was designed for shows such as the fights between gladiators. Other monuments that transport you to the Roman period are the Praetorium and the Roman Circus, a must-see.

Secondly, a visit to its fine-grained, golden-sand beaches is a must, that will have you breathing in the Mediterranean climate that will relax your mind, as well as the aesthetic marina of the city where you can take in a unique enclave from the Mediterranean Balcony, availing of the vantage point to the open sea on the beach. The Serrallo is the typical fisherman neighbourhood where fish is auctioned during the evening. This picturesque area with personality is a very good area for dining in charming restaurants.

A final point worth mentioning is how the modern city coexists with its imperial past at plazas de la Font, del Fòrum and del rei, where you can enjoy a drink on the terraces and enjoy the atmosphere of the city. The Rambla Nova has become a must-see, thanks to being the main promenade in Tarragona, dating back to more than 150 years ago. It has a wide range of shops, making it perfect for taking a stroll, and the central market is just a stone’s throw away, an ideal place to buy fresh and seasonal products in a typical Tarragonian setting. This is a modernist building.

During the 11th and 12th centuries, the Catalano-Aragonese monarches entrusted the foundation of major centres, endowed with abundant agricultural land to the monks, which gave life to the economy and demographics of the new territories.
In Catalonia, these were established at Poblet, Santes Creus and Vallbona de les Monges, responding to the need to recolonise the conquered lands to the treeless, barren Saracens, located in the Catalunya Nova.

The connection of three monasteries through the well-known Cister Route, created in 1989, has led to an indisputable surge in the tourism into the three counties, Conca de Barberà, Alt Camp and Urgell, which have spared no efforts in publicising the land that emanate culture, gastronomy, tradition and heritage.
After a visit to the monasteries, the main attraction, travellers can take a trip around the different towns and villages of the three counties that constitute the Cister Route. 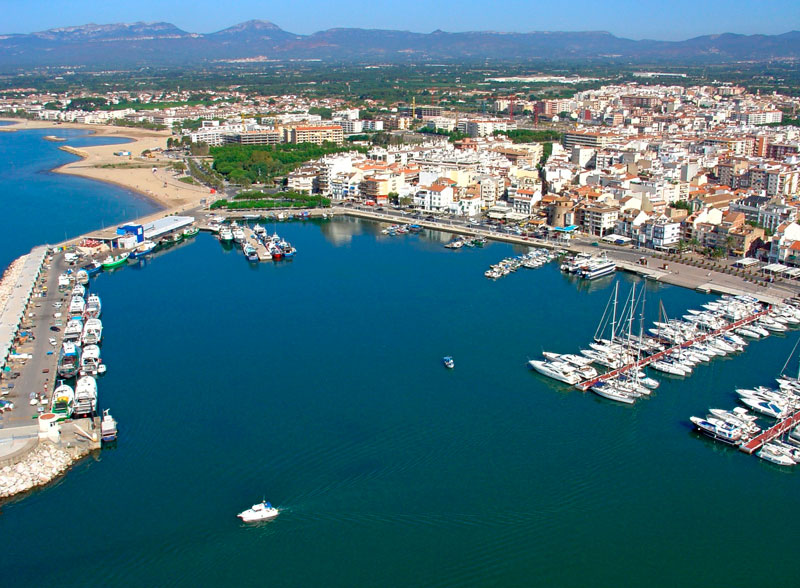 Cambrils is the second town in the Baix Camp region, in the centre of the Costa Daurada, surrounded by the Llaberia and Prades mountain ranges, with gentle slopes that lead into the sea.
It is currently home to 20,000 inhabitants. It has a surface area of 34.76 km2, with a uniformly flat terrain and a slight 2% tilt toward the sea.

Cambrils has perfected the art of converting its sea treasures into a fine dining experience, and of translating its Mediterranean culture as an expression of affection for good taste.

Why not find out by savouring some of the most traditional dishes of Cambrils cuisine such as rossejats, seafood paellas, romescos, suquets de peix, seafood puddings and pates, generous range of sea food., as well as an exquisite range of sauces such as aioli, spicy or romesco sauce helping to determine the flavour of the wide variety of fish dishes of the seafood cuisine of Cambrils.

The tourist activity of the municipality of Vila-seca is mainly concentrated in La Pineda.
Enjoy the 2.5 km promenade and 3.5 km beach in La Pineda, which offer all the services you could need: information, security guard, life-guarding, sports and leisure area, access for disabled, kiosks, etc.

Located in the centre of the La Pineda beach, you will find the Pinar Perruquet park, that is spread over 25,165 m2, and that has been undergoing a unique urban urbanisation process, through the acquisition and expropriation by the municipality of Vila-seca of these lands for purposes such as the opening of urban public park.